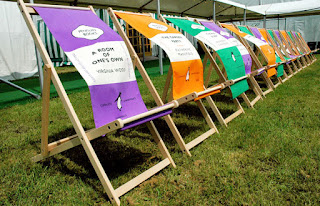 Recently (23rd May) I had the pleasure of attending a reception for the School Library Association (SLA) at the Hay festival. The event was organised by the SLA and Hay Festival and received sponsorship from Frank Lampard - author of Frankie's Magic Football.

There was a visit from the Prince of Wales and the Duchess of Cornwall. The Royal guests were actually delayed due to a fault with their helicopter ( I know how they feel, I often have a similar problem with the CILIP Cymru helicopter*), but it actually meant there was more time to meet with, and talk with school librarians.

The library profession is full of incredibly dedicated and enthusiastic people and none more so than the school librarian.  Many of you will know of the CILIP Shout About School Libraries campaign, which ran from October 2011 until late 2012 and highlighted the excellent work of library staff in schools and lead CILIP to produce School Libraries -a right

As well as enthusiastic school librarians, there were also many school children in attendance, which gave the event even more of a buzz; it is always thrilling to see children excited about reading. One of the children presented Their Royal Highness's with a selection of picture books for their forthcoming grandchild.

It was really good to see school librarians and their work celebrated at such a well known and respected festival.
If you want to find out more about the SLA and the work they support, please have a look at their excellent website

*Please note, CILIP Cymru does not own a helicopter , I mostly use public transport
Posted by CILIP Cymru Wales at 06:29

CILIP Cymru Wales
The Chartered Institute of Library and Information Professionals (CILIP) Wales came into being on 1 April 2002, and is a Branch of CILIP. CILIP Cymru / Wales asserts that high quality library and information provision is a fundamental requirement for an informed, democratic, and bilingual society in Wales and through its members it seeks to make such provision available to all. CILIP Cymru Wales works for the benefit of our members, the wider library and information community, and for the benefit of society. Please contact us at wales@cilip.org.uk